ATEX regulation (ATEX for ATmospheres Explosibles in French) is based on two European Directives (2014/34/EU or ATEX 95 for equipment intended to be used in ATEX zones, and 1999/92/EC or ATEX 137 for worker safety).

This regulation requires all company directors to control the risks related to the explosion of these atmospheres in the same way as all other occupational risks. To achieve this, an assessment of the explosion risk in the company is necessary to identify areas where hazardous explosive atmospheres may occur. In accordance with Directive 1999/92/EC, ATEX areas must be subdivided into zones: 0, 1 or 2 for gases, and 20, 21 or 22 for dust. 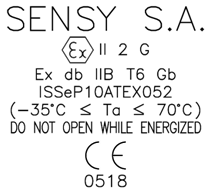 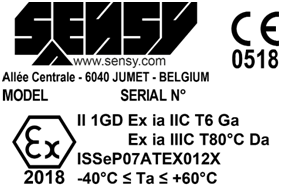 As regards electrical equipment, a complementary marking enables identification of the protection mode:

The Ex code corresponds to the IEC (international) standard.

The second part comprises one or several letters such as "d" for an explosion-proof device, "e" for increased safety, "ib or ia" for intrinsic safety, but also "m", "q", etc.

The last part corresponds to the level of protection of the equipment (from a to c) in the zone (G for gas, D for dust).

The number mentioned below the CE marking corresponds to the number of the ‘third-party’ certification body.

This Directive explains the obligations of manufacturers, importers and assemblers of ATEX equipment as regards their marketing. Category 1 has the highest level of requirement with validation of the prototype, the production line and the instruction manual by a notified body, for example.

Directive 99/92/EC corresponds to the user’s obligations. It specifies that the employer has to carry out an explosion risk assessment and classification of the areas where hazardous explosive atmospheres may occur in zones and give an ATEX risk-awareness training to the employees concerned, which means to its employees but also to employees from external companies. All these risks as well as the additional analyses and the measures taken should be recorded in the DRPCE (explosion protection document) which is annexed to the single risk assessment document.

IEC 60079 corresponds to the application of the ATEX Directive, IEC 60079-0 being the general standard. SENSY is certified according to two different protection methods: