Torque measurement is based on the fundamental notion of the moment of a force, defined as follows (cf. fig. 1):

The moment of force

, where M is its application point, in relation to point O, is defined by:

It is a pseudovector

produced by the vectorial product of vector

. It is applied to O, perpendicularly to the plane containing the vector force and point O, and its intensity is equal to the product of the intensity of force F by length OH of the lowered perpendicular of point O in the direction of the force.

A system of two parallel non co-linear forces of equal intensity and opposite direction constitutes a ‘torque’ of forces. The moment of such a torque is equal to the sum of the moments of each of the forces. Its intensity is therefore equal to the product of intensity F, common to both forces, by distance D of both forces, measured perpendicularly to their action line. 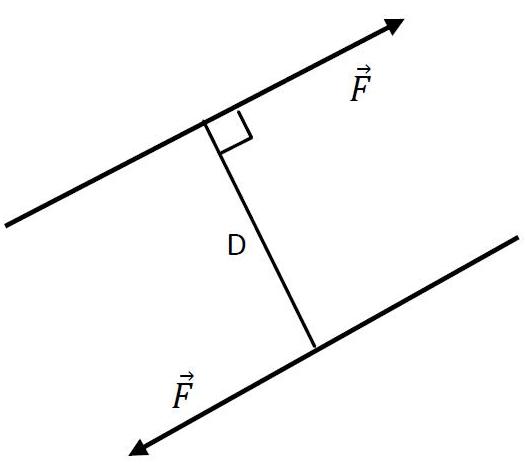 It is necessary to always define if we are in the presence of the moment of a force or of a torque because the conditions of their good measurement are very different.

A torque meter is a measurement instrument analogue to a dynamometer, designed to operate in torsion. Its proof body has a cylindrical shape, subject to shearing strains measured by strain gauges. This type of strain provides measurements which are exactly proportional to the torque applied to the transducer.

As for a dynamometer, the torque meter is linked to a measurement bridge allowing it to feed the transducer and to process the transmitted signal.

Measuring with a torque meter

A torque meter can be used for two operations:

The quality of measurement mainly depends on the alignment of three axes:

For this to happen, all three axes must be materialised by means of mechanical elements which are centred and aligned in relation to one another.

The interfering torques can be reduced significantly by means of specific connecting mechanical devices which limit the effect of alignment failures. These are cardan joints, elastic blades or discs. Rexnord coupling devices are particularly effective.