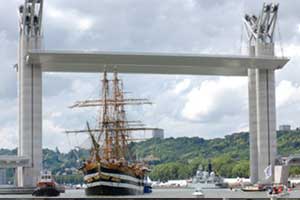 The Gustave-Flaubert Bridge in Rouen was built between 2004 and 2008. It is a road lift bridge consisting of two movable decks 120 metres long which can rise to a height of 55 m to allow cruise ships and large sailing ships to pass through.

Each deck weighs 1,300t and is suspended by eight cables at each end. These cables are connected to four counterweights by pulleys mounted at the top of the columns. Two of these counterweights are pulled down using winches.

During assembly, the forces exerted in each load pin were balanced using an indicator showing the force in two axes.

The other features are:

All these load pins were subjected to a control of the material using a dye penetrant test and an ultrasound test.

Load cell often used for this type of application