SENSY: a manufacturer of force and weighing transducers

Our force transducers, load cells such as our torquemeters, are all available in both standardised and customised versions. SENSY exports 90 % of its production to 80 countries around the world.

A range of transducers and electronics in constant evolution

The dynamics of our team are part of the most appropriate response to our customers’ needs and a succession of technological challenges supported by research and significant developments, by continuous innovation and improving our transducers, and finally by an organisation recognised by the highest quality standards.

Since its creation in 1985, SENSY S.A. has maintained a quality assurance system whereby the tracking of each force transducer is both unique and individual.

For these reasons and in response to our customers’ needs, our quality system meets the requirements of the following standards:

As part of our activities in the aerospace sector, we daily work according to standard EN 9100 and are regularly audited by well-known customers active in these fields according to this standard.

This one is complementary to ISO 9001. It mentions some requirements, definitions and extra notes related to the aerospace industry. Its name is AS 9100 in North America and JISQ 9100 in Japan.

A range of force transducers, torquemeters and extended weighing transducers

The standard transducers and custom-made transducers manufactured by SENSY S.A. are mainly intended for:

We also design and produce:

Our organisation has developed with a view to responsiveness and great flexibility in meeting the needs of our customers: whether manufactured individually or by quantity, miniature transducers or standard transducers and interfaces for the greatest testing machines in the world.

For calibrations, SENSY provides solutions either internally or in accredited laboratories.

In this way, on a day-to-day basis, our multidisciplinary team is able to respond to the most varied and specialised needs of our customers, despite the combination of technical constraints that are sometimes part of the challenge:

"Everything that is sold must, at the very least, be measured, weighed or packaged, and every operation requires the presence of specific force transducers. This is where we come in, in a wide range of areas that are difficult to detail here. To make it short and by taking a few extremes, we can claim that our transducers are also used to weigh crisps, or silos until they are loaded on the last ARIANE rocket for force monitoring" 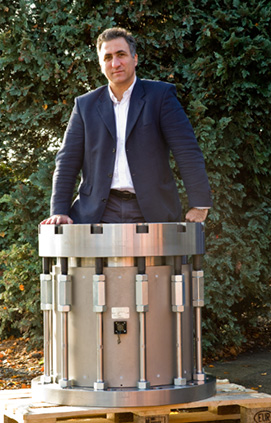