WHAT IS LOAD CELL TEDS ?

For measuring systems containing large numbers of various types of sensors, the configuration and calibration of all these sensors involve a huge amount of work, which is not only time-consuming but also means that mistakes are more likely to be made.

One solution would be ‘‘plug and play’’ sensors which, once connected, would be automatically recognised and calibrated.

Thanks to the standard for a smart transducer interface (IEEE 1451.4), this is now possible.

The standard defines a TEDS as consisting of several sections, each of which refers to information for characterising the load cell. Please see below the two formats that define the specific properties used by SENSY:

For load cells, we work in mixed mode, which involves adding a serial link to the analogue signal that enables access to the load cell's information, available on an EEPROM (Electrically Erasable Programmable Read-Only Memory). 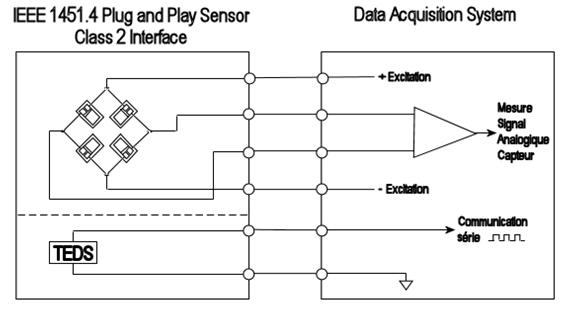 For traditional non-TEDS transducers or for measurement systems that are not adapted to this technology, we also propose virtual TEDS. Here, the principle is identical except for the support on which the data is memorised. In the case of the virtual TEDS, none of the sensor datasheet is integrated into the sensor, but is in a downloadable file ".ted" available on our website. Thus, rather than having to configure your system by specifying all the sensors’ parameters manually, they are identified automatically.