Machines used to test resistance of hardened concrete to compression are verified in accordance with EN 12390-4 which is part of the set of European Standards EN 12390 and EN 12350 for concrete testing. Verification of the forces is based on two main points:

EN12390-4 standard is based on the ratios provided by the compression cylinder to check the homogeneity of force application. It is therefore important that the calibration is based on the same physical quantity. As a reminder, the ratio ri of the bridge i is a unit-less quantity:

With ei as the response to bridge i and 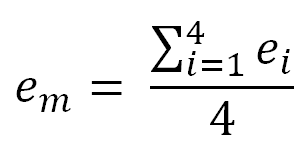