The load limitation business started in 1991 with Belgium bringing in a law on mandatory overload protection on hoisting systems. Thus, we can claim over 25 years of experience in protecting EOT cranes against overload. Over the years, we have encountered multiple demands as classic as bringing conformity to the simplest workshop overhead crane which is little used to the highest-capacity production crane.

Beyond these current needs, we have also addressed more specific and complex requirements, as summarized below: 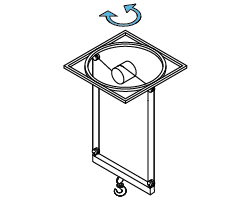 In steel manufacturing, flat products provided as plates (not coils) require a different hoisting system. We have equipped plenty of EOT cranes in loading docks where the finished products are loaded on to trucks that enter the halls perpendicularly and overhead crane paths. This implies that loads have to be rotated through 90°. This requirement is addressed with trolleys that have a hoist on a turret allowing for a 360° rotation.

Hoisting cinematics are usually made from one or two drums and four dead-end anchor points, with tie beams going through the turret frame or made from pad eyes welded below the turret frame. A ‘luxury’ solution would be equipping the 4 anchor points, but it does work perfectly well with two cells mounted on the anchor points in diagonal. It does not matter if this is achieved with annular load cells mounted between the nut locking the tie beam and the turret frame or load pins at dead-ends or between the tie beam and wire rope socket. The safety measurement chain is achieved with an intelligent junction box and load limiter for overload protection and slack rope detection. 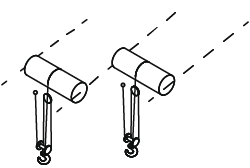 Whatever the design of the crane – multiple trolleys, several hoists on the same trolley or a hoisting cinematic design – the sum of the hoists is higher than the crane’s nominal capacity. Each hoist will have its own overload protection device (load cell + monitor) which will communicate in 4-20mA to a summing module that will stop lifting movements immediately the permissible overload capacity is exceeded, even if each individual hoist is not overloaded. We can also deliver prewired cabinets grouping all load modules in one enclosure. 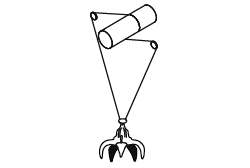 Equipped with a grapple or electromagnet, this type of crane is designed for loading electric ovens with scrap steel to meet the melting point for a factory’s production requirements. As ovens are usually loaded from the top, batches of scrap steel are thus thrown into the ovens, creating huge flames flaring up to the crane trolley and thus exposing the load pin installed below the trolley to high temperatures and flames. Therefore, we manufacture load pins able to sustain temperatures of up to +200°C and compensated for up to +180°C. The electric cable between the load pin and the load monitor is protected by a flame-proof sleeve able to withstand temperatures up to +600°C. 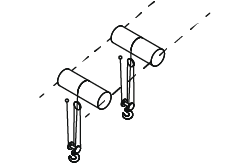 Among our clients, OEM’s manufacturing equipment needs to be lifted in workshops with low ceilings. Therefore, we have attached rails to the ceiling on which chain hoists are placed and can be moved. The mechanical resistance of the ceiling sustaining rails, hoists and loads is limited, implying the need for overload protection on all of the hoists together as well as individual overload limitation. As is the nature of chain hoists, the only way to monitor their load is by integrating a load pin in the mechanics which ensures the hoist can be suspended from the rail. Each individual load limiting device is connected to the summing module which monitors the loading of the workshop ceiling concerned regardless of which rails the hoists are installed on and how many hoists are on the same rail. 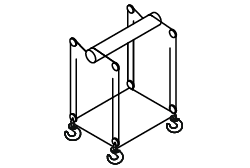 These very special overhead cranes, made from a turret with four anchor points, have a choice of multiple spreader types and weights depending on the product to be lifted: hooks, different amounts of electromagnets, suction system, etc. The needs and strains are multiple,: limitation per anchor point, per sides (two by two anchor points), on the four anchor points, balance control left/right and front/back, exceptional unbalance authorisation by maintenance people and variable “0” load according to dead weight of selected spreader and management of the permissible load accordingly. We use a safety PLC that is complex to program but easy to calibrate on-site with a comprehensive ‘teach’ interface using known loads to program the different spreader scenarios.

EOT cranes with zones of limited load or height along the crane path: 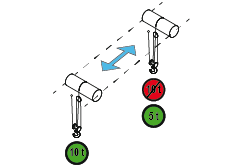 In older workshops, where production layout has to be adapted to existing architecture rather than a new building designed for lean production, it happens to face areas on crane path that cannot sustain the nominal load of the overhead crane, or where there is equipment on the ground preventing the handling of loads, unless lifting at a minimum height. If a brand new overhead crane can be manufactured and programmed to address such strains, it is also possible to commission a solution for an existing crane that will manage the situational scenarios. The solution, beyond an appropriate force transducer, includes PLC and proximity switches and on-site programming to set all load/height/interdiction requirements.